Sitting for hours at a time can cut years off your life and increase your risk for a number of chronic diseases, says Dr. Michael Jensen, endocrinologist and researcher at Mayo Clinic, who has been involved in sedentary behavior research for more than a decade. 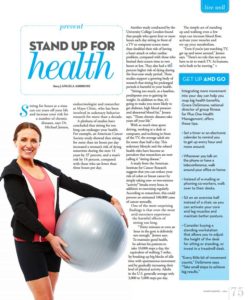 Another study conducted by the University College London found that people who spent four or more hours each day sitting in front of a TV or computer screen more than doubled their risk of having a heart attack or other cardiac problem, compared with those who limited their screen time to two hours or less. They also had a 48 percent higher risk of dying during the four-year study period. These studies support a growing body of research that sitting for prolonged periods is harmful to your health.

“Sitting too much, as a baseline, predisposes you to gaining fat weight. In addition to that, it’s going to make you more likely to get diabetes, high blood pressure and abnormal blood fat,” Jensen says. “Those chronic diseases take years off your life.”

With so much time spent driving, working at a desk or computer, and reclining in front of the TV, the average adult sits for more than half a day. This sedentary lifestyle and the related health risks have become so prevalent that researchers are now calling it “sitting disease.”

A study from the American Institute for Cancer Research suggests that you can reduce your risk of colon or breast cancer by simply taking one- or two-minute “activity” breaks every hour, in addition to exercising regularly. According to researchers, this could prevent an estimated 100,000 cases of cancer annually.

One of the most surprising findings is that even the most avid exercisers experience the harmful effects of sitting too long.

“Thirty minutes or even an hour in the gym is definitely not enough,” Jensen says. To maintain good health, he advises his patients to take 10,000 steps a day, the equivalent of walking 5 miles, by breaking up big blocks of idle time with spontaneous movement and by gradually increasing their level of physical activity. Adults in the U.S. generally average only 3,000 to 5,000 steps per day

The simple act of standing up and walking even a few steps can increase blood flow, activate your muscles and rev up your metabolism.

“Even if you’re just watching TV, get up and move around,” Jensen says. “There’s no rule that says you have to sit to watch TV. As humans, we’re built to be moving.”

GET UP AND GO

Integrating more movement into your day can help you reap big health benefits. Grace DeSimone, national director of group fitness for Plus One Health Management, offers these tips: 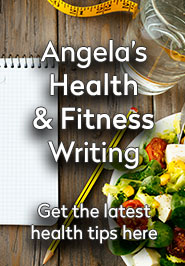